Looking for an electrifying thriller!

Getting in the spirit of Halloween with Great Books for Kids

Victor Godwin's orderly life is upended when he discovers that Benjamin Franklin never actually died–he was put in suspended animation and hidden away for more than 200 years in Victor's basement!
After an accident awakens Ben, Victor must not only help him adjust to the modern world but also help him overcome a slight flaw–when Ben runs low on energy, he turns into a rampaging monster desperately hungry for electricity. All this, while Victor tries to take first place in the school science fair. With one of history's preeminent scientists helping out, what could possibly go wrong? (source: Matthew McElligott)


There are three titles in this series. I wonder if there will be any more? 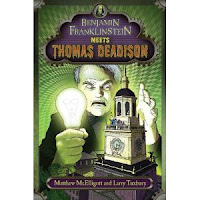 Ben Franklin Fun Facts:
Benjamin Franklin is the only founding father in the Swimming Hall of Fame.
as a youth, he didn't have much extra money. Franklin decided to become a vegetarian. He believed that eating a vegetarian diet was healthier than a diet filled with meat. In addition, meat was much more expensive, so by becoming a vegetarian, Franklin could save money to spend on books.

Benjamin Franklin loved to read, but he when he was young, he was very poor and could not afford books. What did he do? He gave up meat which was expensive and became a vegetarian. By saving money, Ben was able to save money to purchase books. He also felt it was a much healthier lifestyle.

Benjamin Franklin was a gifted speaker. In fact, he LOVED to talk and talk and talk. He was so good saying things that people began to "quote" him. This means they repeated what he said because they felt his words were important and had meaning for their lives. Plus, B.F, was a pretty funny guy.
Here are websites with some of Benjamin Franklin's best quotes:

What is a Pen Name?

A pen name is a fictitious, or made up name, that an author uses when writing. Many authors use pen names for many different reasons.

Ben Franklin was a writer. In fact, he wrote several articles and letter to the editor of his newspaper using made up names, or a pen name. Why? He knew the importance of getting people to talk about important topics just like people use Twitter today. In fact, Ben would have made a great Tweeter.

He also drew cartoons like the snake cut into pieces that represent the American Colonies. He encouraged them to join together to become an independent country away from English rule.

Other words that have the same meaning as the term "pen name "are: Nom de plume, Nom de guerre, alias, moniker or pseudonym.

Set up a science demonstration in the Library Science Center. This will count for a Bluebonnet Project.

Ms. Murphy will help you with all these details.

Create a Jux book, video, or Wordle based on an inventor that interests you. This will count for a Bluebonnet Project.