Getting in the Spirit of Halloween with Great Books For Kids

Come to the Graveyard for a Thrilling Read 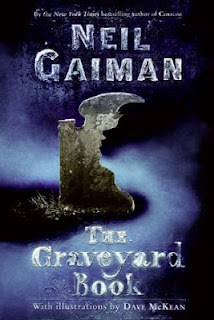 It takes a graveyard to raise a child

Bod is an unusual boy who inhabits an unusual place-he's the only living resident of a graveyard. Raised from infancy by the ghosts, werewolves, and other cemetery denizens, Bod has learned the antiquated customs of his guardians' time as well as their timely ghostly teachings-like the ability to Fade. Can a boy raised by ghosts face the wonders and terrors of the worlds of both the living and the dead? And then there are things like ghouls that aren't really one thing or the other. (source: publisher)

Hear Neil Gaiman read from The Graveyard Book
Be warned-it may scare you!

The Graveyard book is a wonderfully scary book that kids and grownups will both enjoy. Try checking out the audio version from your library for some extra fun bits like dancing to the Macabre "la la la boom!"

This tale begins with a grisly murder of an entire family-save one. A little toddler steps out of his diaper and wonders from the scene of the crime and into a graveyard before the killer has the opportunity to finish his job. The inhabitants of the graveyard are faced with a difficult decision as to what will become of the young child and they decide to raise him as one of their own. But Nobody Owens, known affectionately as Bod, is still not safe with a killer still out to find and kill Bod.