*La Befana Fingerplay: children act out sweeping motion while saying sweep, sweep, sweep) I act out the motions using my hands to show movement across the sky, placing my hands above my eyes to simulate looking for the Baby King, and act out setting presents out for the children. 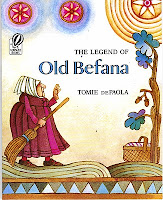 Wonderful book for teaching Holiday Traditions Around the World

The Legend of Old Befana by Tomie DePaola.

Old Befana is a cranky, old woman who sweeps her home and walkway all day. She is not not welcoming to guests, and children do not like her. One night as Old Befana tries to sleep, a bright light floods into her bedroom. The light is a bright star that has suddenly appeared in the night sky. The next morning, a glorious procession of camels, horses, elephants, and three kings stop at her door to inquire if she know the way to Bethleham. The three kings are guided by the bright star as they search for a Baby King. Cranky Old Befana is too busy sweeping and is of no help to the kings, so they travel on their way. A little boy encourages the old woman to come with the procession in search of the Baby King who has come to change the world. Old Befana decides to follow but first bakes cookies, cakes, and candies to bring as her gift to the Baby. Upon leaving, she decides to first sweep her house clean. Old Befana has to run to try to catch up to the procession and soon tires out. The night sky is suddenly filled with angels singing about a night of miracles. Old Befana rises to her feet and begins to run, crying out to the angels to help her find her way to Bethleham. Suddenly, Old Befana begins to feel lighter as she rises up and miraculously begins runing through the night sky. Old Befana never found the Baby King but every year on the Feast of the Three Kings, January the sixth, Old Befana runs through the night sky. She brings gifts to children and then sweeps their rooms clean. She does this in hopes that one of the children might be the Baby King of Bethleham.
Posted by Unknown No comments: