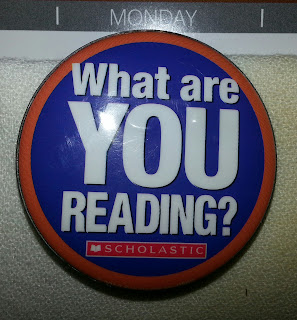 It's Monday! What are you Reading? is a meme began by Sheila at Book Journeys as a way to share what you read and/or reviewed the previous week and what is in store for the upcoming week. It's also a great chance to see what others are reading. I first learned about it at Teach Mentor Texts.

This week was a continuation of library inventory which required mandatory stopping to "smell the roses"(books). The most wonderful part of inventory is getting to revisit books that you have forgotten on the shelves. Poor little books. I will find someone to love you when the students return in August. It is my belief that successful librarians are natural marketing geniuses. We know that a book will sit on a shelf until you advertise it through a book talk, promo poster, or referral. The minute you do so, WAP! the book becomes the hottest ticket in the library and fights almost break out to see who can check it out first. I admit I kind of like inciting this type of book riot.

Here are a few books that will be getting some book love: 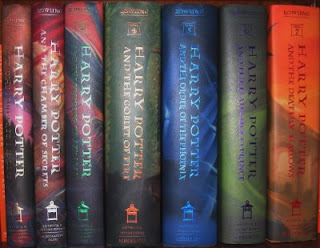 Magical Links:
Scholastic's The Stacks-Harry Potter has some magical games like lighting your wand. creating a magical creature, and Wizard's Duel. I played for a looonnnggg time. 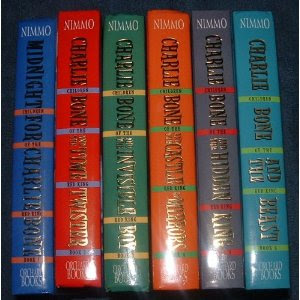 I love this series with all the unusual talents that descendents of the Red King possess.

Fairy Tales and Folk Tale section are also often overlooked because they are not in the same section with the E=Everyone books. This past year I made a special section divider and the 2nd graders really flocked to this 398.2 Dewey section where they also discovered nearby jewels in the 30 and 31 sections which includes many of the World Record, Trivia, Ripley's Believe It or Not, and Almanac books.

My current reads:
I never realized how late it had gotten last night because I was so engrossed into Hold Fast. Now I am heavy eyed at work and can't wait to pick it up again.
Hold Fast by Blue Balliett
(description from author website)

The mystery begins with a bizarre accident on a on a deserted, wintery street in Chicago. Now stir in old Langston Hughes book on rhythms, the Chicago Public Library's huge downtown building, a family of four that finds themselves in the midst of a spiraling nightmare, and the 2003 Antwerp Diamond Heist, the biggest in history.  You will meet Dash, Sum, Early, and Jubie...and many others living in a large city shelter. As dreams chase reality in a fearless yet sparkly search,11-year-old Early Pearl will take you on a ride not easily forgotten.

I am having so much fun re-listening to Harry Potter and the Sorcerer's Stone while I finish up library inventory.

Gwen’s life has been a rollercoaster since she discovered she was the Ruby, the final member of the secret time-traveling Circle of Twelve. In between searching through history for the other time-travelers and asking for a bit of their blood (gross!), she’s been trying to figure out what all the mysteries and prophecies surrounding the Circle really mean.

At least Gwen has plenty of help. Her best friend Lesley follows every lead diligently on the Internet. James the ghost teaches Gwen how to fit in at an eighteenth century party. And Xemerius, the gargoyle demon who has been following Gwen since he caught her kissing Gideon in a church, offers advice oneverything. Oh, yes. And of course there is Gideon, the Diamond. One minute he’s very warm indeed; the next he’s freezing cold. Gwen’s not sure what’s going on there, but she’s pretty much destined to find out.

Eleanor and Park by Rainbow Rowell

Set over the course of one school year in 1985, this is the story of two star-crossed misfits-smart enough to know that first love almost never lasts, but brave and desperate enough to try it.
I just love the start of summer and all its possibilities. I work through the summer but without the students around I can get a lot of cataloging, repairing, sorting, and implementing new ideas done. I move furniture around trying to find the just right feel of the space making it more reader friendly. Summer in my library gives me a chance to try out my crazier ideas between readers camps and tour groups that traipse through to get a good look at our unusual school. My favorite part is all the audio books that I get to listen to while I work. I just wish my local public libraries had better selections,

Are you a fan of audio books too?

I am also seriously in need of an outstanding title to read Something with the whizz bang of last summer's Wonder, The One and Only Ivan, or Liar and Spy. Any suggestions?