It's Monday! What are you Reading? is a meme began by Sheila at Book Journeys as a way to share what you read and/or reviewed the previous week and what is in store for the upcoming week. It's also a great chance to see what others are reading. I first learned about it at Teach Mentor Texts. What a great web site!

This past week, I have been reading many wonderful writing prompts that were contributed during Teachers Write. My goal was to sharpen my skills and watch my grammar issues. Instead, I have been blown away by the talent of the contributors.

Every Soul a Star was the first book chosen for #virtualbookclub, which is basically a group of teachers and librarians who love to read middle grade novels and want to share their thoughts. Beth Panageotou and Niki Ohs Barnes decided to get together and start up the book chat. Now, I love to read, but even more, I love to talk about what I liked and did not like about a book. When a book is as great and is filled with as much potential as Every Soul a Star, who could resist joining in? The first book club went smoothly as we compared favorite characters, favorite lines, and what we thought motivated each character to behave the way they did in the story. The best lesson I l took away from #virtualbookclub was to see the book from the reader's viewpoint instead of a teacher's viewpoint. I asked questions I was interested in learning more about, for example "What exactly is a Messier object?" instead of trying to think up questions to ask a student.

Join us on Monday, July 22 at 9:00 p.m. as we chat about the book Rump: the true story of Rumpelstiltskin. This is my read for this week.We have had all sorts of inappropriate fun talking about this title. #witzelsucht. (see definition below "The Show Must Go On!) 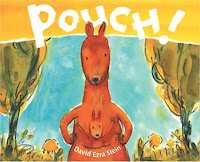 Ages 3-5.
A baby kangaroo gains courage to explore away from his mother’s pouch, but when he meets unknown animals he quickly hops back.
Finding a new special friend helps Joey on his path to independence.

I used Pouch for my read aloud during Parents Orientation for our incoming parents of three-year-old preschoolers. It was a perfect choice. Preschool is about learning to become independent and to socialize in the world. 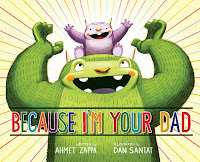 I also read Because I'm Your Dad in particular to the dads during Parent Orientation. I wanted them to see how reading with their kids can be a fun and bonding time. I had great dad reactions to this reading. Several dads came up to request a list of books to read to their kids. How great is that?

This was a fun, short read and will make early chapter book readers happy. I even learned a new word from this book which was perfect timing because of all the lame jokes #virtualbookclub members kept making this week in reference to the book RUMP. See, I bet you just thought of some really funny rump remarks too.

witzelsucht [vit´sel-zo̳kt] (Ger.) a mental condition marked by the making of poor jokes and puns and the telling of pointless stories at which the speaker is intensely amused; 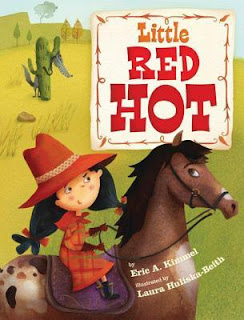 Little Red Hot loves red hot chilli peppers. She eats them for breakfast, lunch, and dinner. When her grandmother catches a cold, Little Red makes her a hot pepper pie that will "knock those cold germs right out of her". But before Little Red shares her pie with Grandma, she meets Señor Lobo. The pie comes in very handy when the wily wolf tries to trick her into thinking he's her grandmother.

My favorite part was a cameo by the Three Little Tamales.

Listen and Watch Eric Kimmel read some of his Texas stories here.


Before you go, take a look at this very well curated 2013 Summer Reading List by the Librarians and the Library Director in Brooklyn, Massachusetts. Fantastic job folks!